Preseason update:
Having moved up from AAA to AAAA, our expectations for the boys and girls teams are high. Graduating no players last year and finishing second in region, the girls team has a number of new players added to their lineup with a wealth of tournament success. The boys team, having graduated 3 seniors, is composed of upper and lower classmen, but is poised to show their depth at all positions this season.

Aashal Dave (senior - boys varsity). Aashal has played for 4 years at NOHS,and has served as a singles varsity player each year. With a tough mental game and the ability to chase down every ball, Aashal will be leading the boys team at #1 singles for his first time. In addition to tennis, Aashal is a leader of the Go Green Club and stand-out student in numerous AP courses.

Abby Bruning (senior- girls varsity). A well-rounded senior player, Abby will be focusing more on her doubles game this season in attempts to add further depth to our lineup. With fantastic form and an aggressive style of play, Abby will pose a serious threat at doubles this season.

The girls will be returning six of the top seven players from last year's
team which lost 2-3 in the final four. Conley Messer is captain and a four
year starter in doubles. Caroline Doherty, Rhea Chatterjee, and Grace
Trimpe played 1, 2, 3 for us last year and likely will do so again. Kendall
Santamaria will be in her 3rd year at playing 1 doubles and sophomore Kayla Cherry will be a returning doubles starter. At present we have three
freshmen players fighting for playing time--Allison Doherty, Catherine
Argabright, and Isabel Lane.

So far our girls have defeated Jefferson, a first for us, and North Oconee in
pre-region play. This is our strongest girls team ever.  Kelsie Gassner, Casey
Ellis and Hannah Rodriguez are the singles players to watch.

3 upper classmen who are new to organized tennis but have qualities that will be great assets to the team this year (Adam Nibbelink – 12th, Remy Buxton – 11th, Jonah Buxton – 12th)

And, we have 3 underclassmen with potential to contribute this year or next (Daksh Patel, Abhu Jadhav, Henry Wu).

This team enjoys playing the game and they will be fun to watch as a unit because there isn’t a stand out player. Each player has a unique skill set. With that being said, I think the level of competition will be high within the Men’s team and that should translate to the region competitions. It should be a great year!

Most of our girls that made major contributions graduated last year. So this year will be a building year for the girls tennis team.

We have 3 girls returning this year that were beginners last year (Natasha Ramirez, Serena Mon and Trisha Hariani who are all 10th graders). These three players have potential to contribute much more this year and have developed qualities to be great assets to the team. They are all very dedicated and work extremely hard.

We have 4 other underclassmen new to the team (Sofia Villalobos (9th), Macie Wilson(9th), Morgan Fabber(10th), and Amber McIntosh 10th).

HIGHLIGHT: Sofia Villalobos will be a player to watch for the next 4 years and at the college ranks thereafter. She has amazing strokes, loves the game of tennis, works extremely hard, has great athletic ability, is mentally tough, and has a good understanding of how to setup a point in her advantage.

Positive Quote of the Week 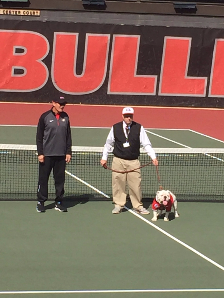 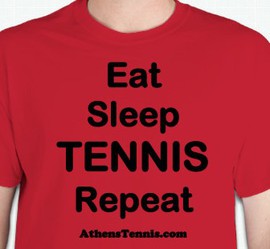